Deep Madness is a co-operative game from Diemension Games for one to six players set in an underwater research station beset by Lovecraftian and other pop culture science fiction horrors.

The most obvious thing to say about this game is that the models looks gorgeous. Or horrific, depending on your point of view. They are evocative of the Cthulhu Mythos and the other horror source material that the game liberally borrows from; less politely, the aesthetic is pretty shamelessly ripped off from every popular movie and video game horror franchise in recent memory. The models are sometimes poorly defined; there were moments when we confused Husks for Ravenouses and Blinds for Deliriums, a quick peek at the model close up sorted it out, but it did add to the frustration of play. The card artwork is also of a variable quality, the effect icons and monster pictures were sometimes indistinct. 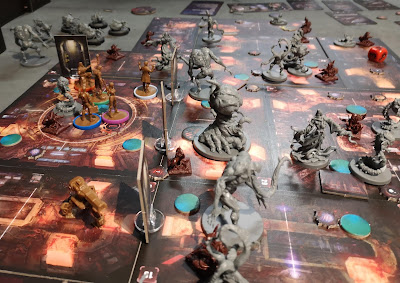 The game is made from sturdy, quality materials; even the most delicate looking models feel like they could take a fair bit of handling without fear of damaging them.

The Madness Within (The Gameplay)

Players and groups of monsters alternate actions. Players can search for equipment, move,  attack monsters and perform special actions, either based on the character chosen or the mission. Monsters have defined actions they perform in order. For example, they may move, then perform a special action, then move again. It tends to be the case that if a monster moves into attack range they perform an attack, but not always. Monster specials can also be attacks but they can also make the monster more powerful. Attacks are made using six-sided dice or a special monster dice.

The play area is made up of individual room sections that are either 'devoured' or 'safe'. Devoured rooms have slightly different artwork, random negative effects on them, and monsters can spawn in them. Each turn a random safe room becomes devoured, increasing the number of possible spawn points, and a random amount of monsters are added to the board, starting in the newly devoured room. We normally added between 4-10 monsters a turn. Monsters are randomly drawn from an array of six monsters, randomly determined from a much larger group during setup. As you can see, there is a lot of randomness in this game.

This randomness mitigates against strategic or forward thinking. You end up analysing the board as it stands, as it changes radically from turn to turn. Plans rarely survive first contact, so they become fairly pointless as the game progresses. As the board fills up with monsters, the choices the players can reasonably make radically decrease so this only gets more pronounced.

The best spin on this is that no game will ever play out the same way, even using the same mission. However, this variability does mean that the game can be horrifically unbalanced or broken and essentially unwinnable from the start. We relied heavily on one character's special ability to move monsters around using a sonar decoy. Without that, it would have been extremely difficult to complete the mission objectives.

Time Out Of (Board) Space

If each game took less time to play, this wouldn't be an issue, but there are three or four actions a player can make on their turn, and each monster has two or three actions to determine as well. With six players and anywhere from 5-30 monsters on the board, that's a lot of actions to process. If we assume one minute thinking time per player action, that equates to 18-24 minutes per turn. Even after playing several scenarios, we were still taking many hours to play through each mission. It's a hefty time investment if you have an unlucky set up.

In the Madness Within scenario each character achieves their objectives by killing a different monster type each turn. Some players were able to quickly score, as they were lucky in the monster spawning phase; they were in the right position on the monster track to score and they had found some effective weaponry early on. Other players were not so lucky and spent more than half the game without scoring because they were out of position or because the one monster they were able to kill that turn wasn't worth any points to them. We got through eight turns (out of a possible twelve) in four hours, with the host setting up for an hour beforehand, before giving up at midnight.

The Niggling Horror Under The Sea

Deep Madness is co-operative, so monster actions are decided by the players. This leads to a certain amount of fudging when the monsters could move one way or another; players can choose which player character a monster moves towards (if the characters are equidistant from the monster) and who they attack (if there are two characters in range). It feels very much like you're playing damage limitation when you're controlling the monsters. This is by design, but what you end up with is monsters that don't behave as threateningly as they could or should be, so it diminishes the tension in the game and spoils the narrative aspect too. This is my biggest gripe with games of this ilk: players have to, or feel obliged to, minimise the threat from the encounter to win, which creates a certain amount of dissonance. Dark Souls has the Rule of Death to counteract this effect, but there is no such command in Deep Madness.

The monsters known as Grudges embody this problem. Their card states they only attack if a player moves into their range. A number of times Grudges spawned on top of players  or into adjacent squares, so they effectively moved into range of the player. Should the Grudge attack or not?  I argued that the rules stated they only attack when players move, so they shouldn't attack initially and shouldn't attack when players move within or out of range. I'm fairly confident that the first part of this interpretation is right, but the second feels narratively wrong, even if it is technically correct. I'm not sure it is technically correct, but the ambiguous language on the monster card doesn't help.

The Haunting Conclusion of The Dice God Dodecahedron and his Foul Ilk, the Hexophranic Banishers

Moment to moment, Deep Madness has bags of tension and feels thrilling. But it is draining for the wrong reasons and a small amount of reflection destroys the artifice the game is built on. The difficulty comes from waves of creatures and huge amounts of busy work instead of a compelling gameplay element. The arcane win conditions and large number of loss conditions should be a clue; players lose when one of them dies, or they run out of monsters to put on the board, or the turn tracker runs out. I didn't find any of these particularly narratively compelling. Why would losing one player signal failure? Horror stories are generally littered with bodies of everyone except a main character or two. What narrative function does running out of enemy models serve? Adding a ticking clock is a particularly easy way to engineer tension, but is it necessary or effective in every scenario?

So, on reflection, I didn't like it much. How about you?
Posted by Rob Sharp at 16:08
Email ThisBlogThis!Share to TwitterShare to FacebookShare to Pinterest
Labels: Board Game, Deep Madness, Diemension Games, Review