The Eyes of the Nine 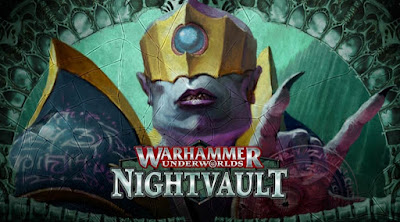 The Eyes of the Nine are a Tzeentch warband for Warhammer Underworlds. Led by the wizard Vortemis, this five man band (with one or two horrors depending on how you want to count them) serve the Lord of Change in their nefarious plot to connect the Realms of Chaos to Shadespire.


I've been having mixed success in my gaming group playing a hybrid spellcasting/Acolyte of the Katophranes Objective deck. I've found that buffing Vortemis a little makes him a pretty potent and reliable spellcaster, allowing me to easily score Agents of Change and Masters of Magic with a heavy dose of Gambit spells in my Power deck. I've stacked my upgrades with innate lightning bolts or the ability to change rolls to lightning bolts. This allows any spellcaster to be able to play spells as if they're playing ploy cards. If anything, I've probably over egged this element of the deck, so could do with replacing some of the upgrades that do essentially the same thing to buff the rest of the warband.
Sorcerous Retort was tried and quickly binned and Magical Mastery is for the chop next; getting enough cards and/or enough models around Vortemis to cast six spells or a spell reaction just hasn't worked out for me. I spent one game spending four activations to cast Vortemis's Bolt of Change attack. When it didn't pop until the third or fourth activation of the second round, it was too late to get glory to power the warband up.

Therein lies the major problem with this warband/deck combo - it relies too much on a single model. Vortemis is pretty solid, especially when inspired, but with only four wounds and a single dodge dice for defence until then, he's really vulnerable to quick charging damage dealers like the Skritch, Riptooth or Mollog. K'charik is easy to inspire, however, and you'd be foolish to leave him alive if he's close to Vortemis and you've gone all in on the leader. The ability to re-roll any dice when attacking is really great, making him a very reliable heavy counter. Narvia and Turosh can be useful distractions and, because of their range and speed, are at less risk of being squished than other melee based filler models and are pretty good at making charges into enemy territory for Eyes of the Master. The additional range upgrade, unique, I think, to the Eyes warband, means one of either Narvia or Turosh can fire off ranged attacks with no fear of reprisal unless charged.

When the deck works, it's a thing of beauty. After the initial speed bump, you're not reliant on rolling dice or grabbing objectives to score. Once you've powered up Vorty, he's a very scary ranged damage dealer with an insane number of gambit spells that just go off with no risk of failure or double critical damage. Abasoth's Unmaking counteracts a deck weighted towards holding objectives, and is a really simple way to score Scorched Earth. The Katophrane Tomes are great buffs and can be given to your Blue Horror which greatly reduces the chance they'll be taken off the board permanently if/when the horrors are taken out of action. If you're comfortably winning in the first round of match play, it may even be worth keeping the tomes in your hand to surprise the other player who would certainly counteract your spell-casting strategy by going after Vortemis in the second or third match up.